“Five Eliza” is the pop up bar in Sydney for the next fortnight as part of the Sydney Fringe Festival, and it’s so sultry with its 1920s speakeasy aesthetic that I almost wish it were illegal for authenticity. Last night I sauntered into Five Eliza with some friends and was fiercely pleased by it all. It’s in Newtown, in an old ballroom belonging to Newtown School of the Arts. If you turn down the laneway beside Zanzibar, you’ll find it up a dirty little staircase illuminated by a red lamp (Roooxanne).

Enter the room, and if you can see clearly in the dim lighting, you’ll discover a room kitted out in extravagant armchairs, antique side tables and seductive lamps. The bar in the corner is staffed by volunteers, and the cocktails are divine. My favourite was “Salvatore’s Secret”, which was orange marmalade flavoured and served with two pieces of buttered toast. Other highlights were the “Pro-inhibition Juice” and kitsch bottles of Pipsqueak cider. ’twas all rather cheap as well, with cocktails only $10-15, the most expensive involving Absinthe (one such beverage was called “The Pantie Dropper”).

All the while, we were serenaded by the delightful Lily Dior, who was beautifully dressed and performed a repertoire of very mood-appropriate jazz songs. A table of particularly keen visitors to Five Eliza began to salsa dance and lindy hop rather extravagantly, to the amusement of the room. I have an inkling that they might have been into the Absinthe punch.

If you have an evening spare, eschew any other venue in favour of Five Eliza. You ought to experience it before Sydney Fringe Festival ends on October 2. 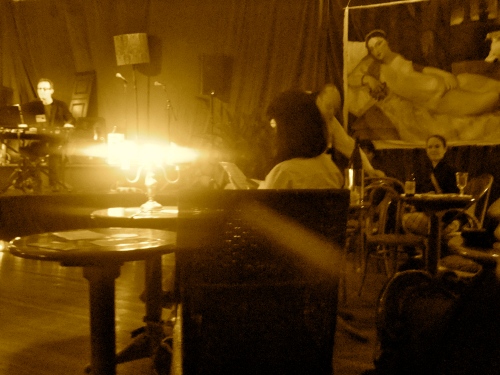 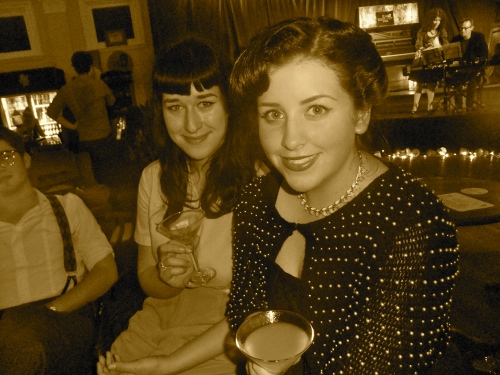 In addition to this, I have some photos from the morning. I suppose my point in posting these is to show off my new fringe technique (my victory rolls weren’t flawless, but seriously friends, check out that perfectly coiffed fringe), and my stockings. The stockings came into my life on Monday in a pre-swing dancing shopping expedition. Deceptively, the stockings are in fact fishnets, making them a comfortable version of seam stockings for the warmer seasons. They’re made by Leg Avenue, and though I bought them at Retrospec’d in Newtown, I daresay you could order online somewhere. I heartily recommend them!